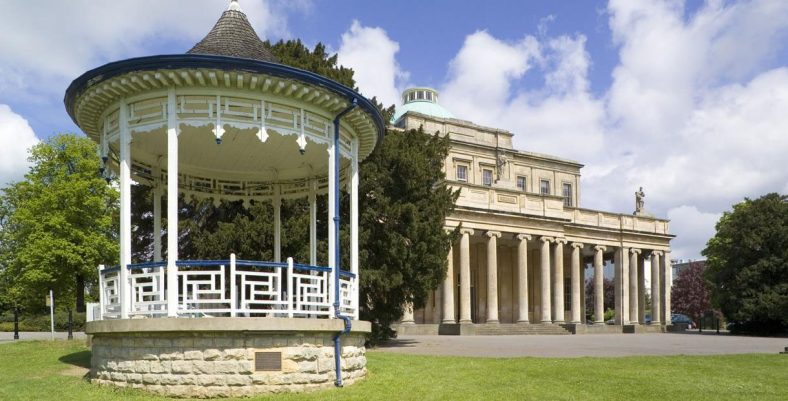 This is an online version of Volume 9 of the Gloucestershire Record Series, published in 1997.  It’s an historical A-Z of some 3,000 street- and place-names in the present borough of Cheltenham, from Saxon times to the end of the twentieth century.  There has been some updating and correction of entries since the print edition. The Society is greatly indebted to Dr Ray Wilson for producing this searchable online version.

From the Introduction to the 1997 print edition

This Gazetteer has been compiled with several sets of readers in mind. Those with a declared interest in the county’s past should find here an accessible contribution to the history of Gloucester’s younger rival. Others with an interest in not just the past of Cheltenham but also its present and future should find much material here to broaden their knowledge and appreciation of the town. Those who simply enjoy names will find ample scope for browsing.

The present work, while inevitably leaning on a good number of previous ‘books about Cheltenham’, also presents for the first time in print a great deal of new material. It differs from earlier accounts by offering a systematic record of the whole fabric of the borough, rather than selectively addressing the fashionable or famous. This systematic approach brings a new standard of reliability to the dating of streets and features. It also reveals the origins of parts of the town that some may have thought had no history worth the telling. Naturally, there is normally more to say about streets of Regency origin in the centre of town than there is about a road on an inter-war council estate, or a 1990s infill scheme, but all three types of development (and there are many more besides) are part of a whole. Each receives appropriate reflection.


Scope of the work

The gazetteer aims to locate, date and where necessary explain all the street and other place-names within the built-up limits of the present borough of Cheltenham. It thus includes not only the parish of Cheltenham, but also Charlton Kings, Leckhampton, Prestbury, Swindon Village, and Up Hatherley – an area which virtually coincides with the former Hundred of Cheltenham. These three objectives, of locating, dating, and explaining, have been met to varying degrees in each case, depending on the source material available.

Included are all named roads, streets, localities and watercourses. Also listed are some individual buildings or noteworthy features where the name is intriguing, especially if unrecorded in other works on Cheltenham (examples are Football Close, Icebank and Nogglins). Parades and terraces once separately named, but now simply listed as numbered houses in longer streets, are also covered. Most named pairs of villas, if earlier than the 20th century, are included; later villas only selectively. Several of the older inn and pub names are noted, but this sub-set has not been studied in any depth.

Except for some particularly striking examples, field-names are generally not included unless they were later adopted for other use: though the late Barbara Rawes’s pioneering study of Cheltenham fields has been a great help, field- and close-names can be very fluid, and the land they designate can be hard to pinpoint on a modern map.

The gazetteer embraces some 3,000 toponyms of all periods, from the earliest Anglo-Saxon examples (Arle, Rungebourne) to the present. It was originally published as a book in 1997 (now out of print). The online version includes corrections and amendments to the 1997 text, and newer material up to 2003.

This book has drawn on many sources. The initial material included a modern street map, A. H. Smith’s Place-names of Gloucestershire, and the published histories of the town. All the sources have their strengths and all contain inaccuracies, which the systematic approach taken for this gazetteer has helped to correct. The printed sources are listed in the bibliography, and require no further special mention here. The unpublished or more obscure sources, few of which have previously been examined specifically for the dating information sought in this study, deserve some comments.

Because of the limited development of the town before 1800, relevant records are rather few, and the richer ones (such as the manor court books) are not always easily exploitable. Matters improve in 1786, when the earliest local government records begin. The minutes of the paving commissioners appointed under the 1786 Act provide many of the earliest references to particular streets, once new developments required lighting and paving. Council committee minutes, or their earlier equivalents, survive to varying degrees for much of the 19th century. Also very productive are the local newspapers of the 19th century: Cheltenham’s first paper, a weekly, began in 1809. Before then Gloucester and Bath papers give occasional coverage. The most useful items are property advertisements and the like; editorial reflection of Cheltenham’s structural development is very rare, especially in the earlier years. Only some of these newspapers have been indexed, but others are partly accessible through cuttings and extracts, notably in Councillor Miles’s extraordinary scrapbook history of the town.

Town and county directories, which cover Cheltenham fitfully from 1800, and regularly from 1837 to the mid-1970s, are a good source for narrowing down dates, but any single statement in a commercial directory needs to be treated with reserve, until corroborated elsewhere. More specialised sources included the 1800s Cheltenham Building Surveyor’s Certificates, issued after the town surveyor had inspected a new or altered building to check that it met certain standards, originally intended to stop the spread of fire’. The inspections began in 1813, though formal certificates were not introduced till 1824. There is a good run of these certificates from then to 1840, and a few for 1848. They pinpoint the construction dates of many buildings in the core ‘Regency’ parts of the town. The printed minutes of the borough council (surviving from 1896) are very useful for dating accurately the Cheltenham names of the 20th century, though only for the area then in the borough. Early coverage of Prestbury, Charlton Kings and so on is less regular, though of course there are fewer names and streets to include.

The other main source group was maps. They are many and varied, both in style and quality. The published benchmarks are in 1820 (Cossens’ ‘Post Office’ map); in 1834, when H. S. Merrett published his excellently surveyed and beautifully printed plan of the town; and the first large-scale Ordnance Survey, made 1884-5. They are complemented by manuscript plans and surveys, many held either in original or copy at the Gloucestershire Record Office. Chief of them is the large-scale ‘Old Town Survey’ of 1855-7; it was undertaken mainly for the utilitarian end of showing where the drains and sewers lay, but is nonetheless astonishingly detailed and skilfully executed.

While research for the gazetteer made full use of the main sources listed in the bibliography, the potential for factual additions and refinements is almost unlimited. The history of most of the more recent names is reasonably well established, but it will he clear that for some earlier names the entries are interim statements; the available facts are presented, offering a spur to further quarrying before firmer dates and explanations can be tendered.

Where possible, each entry consists of

Names are to he taken as lying within the central part of the Borough unless shown otherwise (as Charlton Kings, Leckhampton, Prestbury; Fiddlers Green, Rowanfield, Warden Hill etc). To make geographic references simpler, the High Street is taken as running due east-west (in reality it is more south-east to north-west), with roads perpendicular to it being taken as running north-south.

Bold means a current name; italic indicates a name no longer in formal use, or a feature now vanished. ‘Theme’ means the name is one of a local cluster of related street names, as discussed above.

In recently-developed streets, the date of ‘agreement’ refers to the road and sewer agreement between the developer and the Borough Council. This process, sometimes called adoption, will usually match to within a year or two the date of building, though occasionally there is a more substantial interval, sometimes stretching into several years.

Comments and suggestions for additions and corrections to this online version are welcome, especially if supported by verifiable source details. Please contact the Gazetteer editor, James Hodsdon.

Note: This is an adapted version of the introduction in An Historical Gazetteer of Cheltenham, ed. James Hodsdon (Gloucestershire Record Series 9, 1997) ISBN 0900197 43 9.